arry and Patricia Reynolds, your hosts, are recent transplants to Virginia, 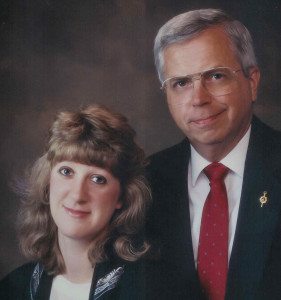 having moved here from Maryland in 2013. But, they both have deep ancestral roots in Virginia. Patricia traces her ancestors to Gabriel Holland. He came from England and settled in Jamestown in 1621. She has been able to locate his house lot inside the fort. Larry traces his ancestors to Johann Philip Harless, who came with his wife and a son, born on the ship during the voyage, from Germany to Philadelphia in 1738, settling in Augusta County, Virginia, by 1744.

Patricia is a native of Maryland and practices as a physician assistant in Williamsburg. Larry is a native of Illinois and grew up in Wisconsin. He moved to Maryland in 1972 where he later met Patricia. Educated as an electrical engineer, Larry is retired from marketing communications and business management. He worked his entire career in the aerospace, scientific, and telecommunications industries. Larry now volunteers at Colonial Williamsburg, working in the Brick Yard and historic masonry trades, with the local humane society, and as a rescue dog transporter along the I-95 and I-64 corridors.

They honeymooned in Colonial Williamsburg, staying in one of the colonial houses in the historic area. Walking around the restored capital, they fell in love with the history and the country lifestyle. They knew they would eventually move to the area and wanted property where they could plant an orchard and gardens. Larry began researching plantation house architectural interior and exterior details and furnishings. That turned into a 30-year project with Larry designing a typical two-story, central passage Chesapeake plantation house that would have been owned in the 18th century by a middling farmer. In 2002 they purchased 16 acres in New Kent County, Virginia. Two years later they purchased an additional 7⅓ adjoining acres. The Carriage House was completed in 2010 and the Main house in 2014.

Both Larry and Patricia enjoy entertaining and love to cook and look forward to being your hosts. Patricia’s specialty is entrees and breakfast dishes while Larry’s specialty is baking (he is known as Baker Larry™). The house features a large gourmet kitchen. They have been collecting breakfast recipes for many years and serve a delicious, multi-course breakfast.