By Larry Reynolds on January 11, 2017 in Uncategorized

January Snow Storm. Gracefield Hall got 6-8 inches of snow during the storm last weekend with the morning lows in single digits. It was dry powder so not very good for making snowballs. Mt. Pleasant Road was plowed and sanded so, what with the warmer weather, it is in good condition. Yesterday it was in the 50s and this morning at 5:45 a.m. it is already 39, so the snow will not last long. 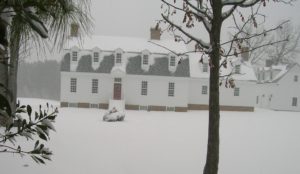 I was at the end of our driveway Sunday morning shoveling the snow and ice chunks that the state plow had piled up in front of our driveway when a neighbor who lives on an intersection road stopped in his pickup truck and offered to plow our driveway. Given it is over 700 feet long, I asked how much it would cost and he said “no charge.” (Are people in New Kent County friendly or what?) He said he was waiting for the diesel fuel to warm up in his tractor (it was 3 degrees) and would be back then.

About an hour later I looked out the kitchen window and noticed the driveway had been plowed. Patricia had made a batch of blondies for him so I walked down the driveway to look for him. He was across the road plowing that neighbor’s driveway so I started to walk down the road. Before I got there he had finished and turned up the road and over the hill. I stopped at the neighbor’s house to get the name of the man on the blue Ford tractor but the neighbor said all he knew was that he lived on Travis Trail.

A special thank you to the man on the blue Ford tractor who lived on Travis Trail in Providence Forge, Virginia. If anyone knows who he is, tell him to stop by; we have a batch of blondies waiting for him.