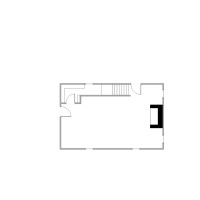 First, he clears a house site in the middle of his property, erecting a rudimentary earth-fast cabin (an earth-fast building has no foundation and is built with vertical posts set in the ground). He marries, raises a family, and within a few years he has earned enough money from selling timber to build a house, kitchen, and stable. He names the house Gracefield Hall after the road on which he lived in England. During the intervening time he has paid the passage from England for several indentured servants to work on his property. The usual term of service is 7 years in exchange for paying for their voyage. There is no record that he ever owned any slaves.
The gambrel roofed, 2-storey house is a single bay (one room wide), double pile (two rooms deep) structure with an English basement, a hall in front, a chamber in back, and a side passage. On the first floor, the front room, the hall, would have been a day room where meals were eaten and the wife and any older daughters would have spun, woven, and made clothes and other items. It is also the room where guests would be entertained. The back room, the chamber, on the first floor would have been the bedroom for the farmer and his wife and any infants. Children and any respected visitors would have slept in the two chambers above (visitors of the “lower sort” would have slept in the stable). The detached 1½-storey gable roofed kitchen is a large building with a brick floor, that also served as a laundry and work room, and sleeping space on the second storey for servants. The 1½-storey gable roofed stable holds his work animals with a side room for grain and feed storage. There is space above where the stable hands sleep and eat.