Now enter the house, close the door with the large brass box lock, and stand on the heart pine flooring which is throughout the house. You have entered a center passage that extends from the front to the back of the house with the back door under a transom window visible at the rear. A double row transom window is over the front door. Both transoms provide light in the passage which has no other windows. Stairs and a landing lead to the second floor. In the corner by the front door are tin candle lanterns used to light the front steps or the back sidewalk. Ceilings on the first floor are 10 feet high to allow heat to rise and keep the rooms cooler.

Guests were received into the passage which served as a reception area and a barrier to allow strangers and servants into the house without giving them access to other rooms. The passage was designed to impress. The front and back doors have large brass box locks and hinges whereas all the other doors in the house have iron hardware. It also served as a work area during the summer. Both the front and rear doors could be opened to allow breezes to sweep through and cool the passage. Depending on their status, visitors would remain there or if known to be of significant social status would be invited to enter the parlor, or even the dining room if invited for a meal.

A portrait of the owners is on the wall opposite the stairs and is lighted by adjacent sconces. Portraits in the 18th century were usually painted by limners; itinerant painters who travelled throughout the colonies painting portraits for those who could afford them. Notice that wall sconces are used for lighting throughout the house. There are no chandeliers, which were rarely used in colonial Virginia houses. 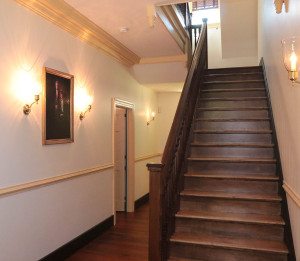 The passage extends to the back door with a portrait of the owners on the wall between two sconces. Crown moulding, a chair rail, and wide door casings in a muted tan color accentuate social status. Stairs lead to the second floor.

Brass H-L and H hinges and a brass box lock on the front and back doors indicate wealth and social status. The two large bolts in the upper center of the door secure a large brass door knocker on the exterior of the door.