With the exception of the lantern lights on the back porch and the carriage house, you will also notice there appears to be no exterior lighting. A small recessed fixture in the ceiling of the front porch roof illuminates the porch for guests. There is an identical light fixture in the soffit about the kitchen porch. Sandstone steps on the front and back porches would have had to be imported from England; today they are made domestically.

A large covered back porch provides a place to sit outside for cooling breezes. In the 18th century, to avoid the heat inside the house, it would have been used as a work space during the summer. Unknown visitors and visitors of the lower sort would have been told to wait on the porch for admittance to the house. In some cases they might be admitted to the passage and no farther into the public rooms of the house. Or, they might never be admitted to the house at all, instead remaining on the back porch.

The ceiling is painted Gullah blue or haint blue (a haint is a spirit of the dead) and was used primarily on the outer barrier islands of South Carolina. It was believed the spirits would be fooled, thinking the ceiling was the sky, and fly through the ceiling instead of entering the house. Eventually, that color for porch ceilings, which was thought to ward off insects and evil spirits, was brought to Virginia. 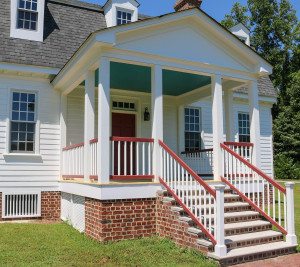 The covered back porch has a Gullah blue ceiling to ward off spirits. The covered porch replaced a small uncovered porch at the same time the dining room and study were added.