As you approach the front of the house, notice there is a vertical corner board to the right of the front porch door. This corner board is where the original house ended before the space between the house and kitchen was filled in. The seam continues down through the brick on the foundation wall. There is a similar corner board and masonry joint in the side of the carriage house to make it look as though the shed was added later.

Step back and notice that one side of the house is wider than the other side. The space between the original house and the kitchen is wider than the width of the original house to the side of the passage. The siding and foundation bricks on the kitchen do not match up horizontally with the siding and bricks on the house as would have happened when the kitchen was raised and the space between the house and kitchen was filled in. 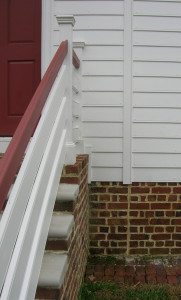 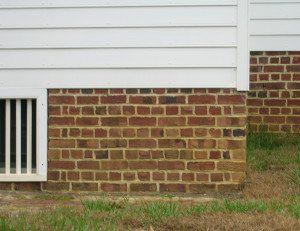