I am researching 18th century fire boards at Colonial Williamsburg and will visit the historical interiors collection later this week. They are also called chimney boards and were used to close off a fireplace opening during the summer when the fireplace was not being used. Kitchen fireplaces never had fire boards because that fireplace was used every day, winter and summer. There are few existing examples because they were thrown away when dampers were added to chimneys. Occasionally, the board was tucked away in an attic or basement and has survived.  Most surviving chimney boards are early-mid-19th century. Colonial fireplaces did not have a damper to close off the flue so birds, bugs, critters, and dirt could fall down the chimney and get into the room. The chimney board closed the opening, acting as a sort of damper, and prevented anything from getting into the room.

We have two wood-burning fireplaces; one in the parlor and another in the dining room. I want to cover the openings during the summer. Until I do more research, I am not sure of the subject matter I will choose. Whatever it is, I will paint the scene on #8 canvas floorcloth material, the same material used for the 2×3 floorcloth I painted, and attach it to a wood frame to insert in the opening of each fireplace. Right now, I am leaning toward a still life and a landscape. To be continued. 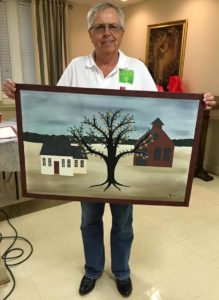 2×3 floorcloth I painted with a farm scene